UCLB has announced the winners of two awards it has sponsored as part of the UCL Awards for Enterprise.

Professor David Selwood, Head of Biological and Medicinal  Chemistry at the Wolfson Institute for Biomedical research at UCL was awarded the UCL Business Award 2012 for his long working relationship with UCLB.

The judges also recognised and the number of projects he has worked on during his tenure, including three start-up companies – ProAxon, NCE Discovery and Canbex. The latter has received £2 million in funding from The Fast Forward, the US technology transfer arm of the MS Association, and the Wellcome Trust, so advance a compound which could treat some of the symptoms of condition.

The UCL Business ‘One to Watch’ Award was presented to Professor Neal Skipper and Dr Chris Howard, from the London Centre for Nanotechnology for the development of a novel process to  purify and separate carbon nanotubes.  The process was successfully licensed to Linde Group for commercialisation. 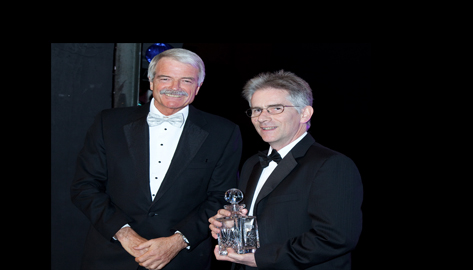