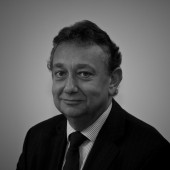 Having trained as an accountant, Cengiz joined the Royal Free Hospital School of Medicine (RFHSM) in 1989 and continued as Director of Financial and Business Affairs for the Medical School on its merger with UCL. Cengiz established Freemedic plc as the commercial arm of RFHSM in 1993 and has been Managing Director of UCLB since 2004. He was previously involved with PolyMASC Pharmaceuticals plc, one of the first university spinouts to float on the AIM, and has set up many licences. He was also involved in the trade sale of Medic to Medic Ltd to Informa plc in 2005 and Stanmore Implants Worldwide Limited to Abingworth and MDY Healthcare in February 2008. Cengiz acts as a Director for a number of UCLB’s spinout companies, including Pentraxin Therapeutics Limited, Evexar Medical Limited and Abcodia Therapeutics Ltd.